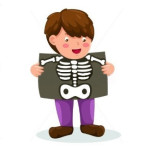 There are a number of side effects of having Ehlers Danlos Syndrome: grumpiness, laziness, cynicism towards the entire medical establishment, and also unfortunately weak bones. EDS causes joint pain… which makes it hard to exercise… and inactivity over a long period can cause your bones to waste and get weaker.

I’ve had joint problems for many years now and haven’t been able to exercise much. So I’m at high risk of getting weak bones, or to use the medical term ‘low bone density’. To monitor the strength of my skeleton I’ve had several bone scans, the first in 2006, then in 2010 and two weeks ago in 2015. Bone scans aren’t invasive or uncomfortable at all. You lie on a firm bed while a robot arm moves over you. They take a 30 second scan of both your left hip and lower spine. These areas apparently give an accurate representation of the bone density across your whole body. The scans have to be processed which takes a week or two.

Bone density refers to the amount of mineral matter per square centimetre of bones. The results are given in two forms:

T score – Your bone density compared to a healthy 30 year old female (I’m not kidding. Unfortunately the comparison is not made in person. I did offer).

Z score – Your bone density compared to a person of your gender and of a similar age.

The T score is more commonly used as it better predicts the risk of a future fracture. The results are expressed as a ‘standard deviation’ away from a normal result eg. -2 SD (standard deviations).

A result of 0 is normal.

A result of -1 or more gives you a diagnosis of Osteopenia (bone density which is lower than normal).

A result of -2.5 or more gives you a diagnosis of Osteoporosis (Osteoporosis literally means ‘porous bones’).

A result of +9000 or more means you’re probably from the planet Krypton (I am such a nerd!) 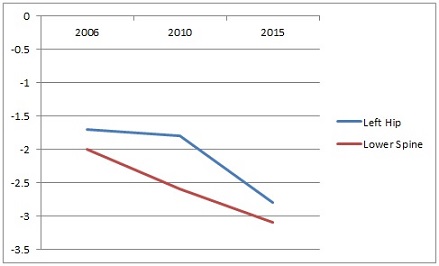 As you can see my bone density has been getting steadily worse. In 2006 I was diagnosed with Osteopenia. As of two weeks ago my diagnosis is now Osteoporosis as both my hip and lower spine have bone density more than -2.5 SD away from the norm.

For long periods in the last five years my nutritional intake has been really poor and I’ve also been very inactive. So I was expecting my latest bone scan results to be worse, as was my GP. I wasn’t upset about the new diagnosis and I’m not in any extra pain. After my 2010 bone scan I spoke to a rheumatology consultant and I asked for the problem to be treated, but he declined. Now my diagnosis has changed to Osteoporosis it’s very likely I will be given treatment. So I’m actually rather relieved that an issue I’ve known about for many years will finally be dealt with. It’s odd, but the problem needed to get worse for it to be taken more seriously.

Osteoporosis is not life threatening, but if I had an accident I’m more likely to break a bone. Thankfully Osteoporosis is treatable with drugs called bisphosphonates. Bone undergoes constant turnover and is kept in balance (homeostasis) by osteoblasts creating bone and osteoclasts destroying bone. Bisphosphonates inhibit the digestion of bone by encouraging osteoclasts to undergo apoptosis, (cell death), slowing bone loss.

I had a blood test last week which showed my calcium and vitamin D levels are in the healthy range. So thanks to parenteral nutrition my dietary issues have been resolved and won’t contribute to this problem anymore. However, due to inactivity from joint pain my bone density could get even worse so I’m being referred to Dr Alan Hakim, a rheumatologist and specialist in hypermobility. I’ve mentioned Dr Hakim’s name on this blog before. I’m in safe hands.

I found a couple of studies which showed the link between EDS and low bone density may not just be lifestyle related and there may be an inherited structural element. Several connective tissues diseases such as Osteogenesis Imperfecta affect the strength of bone and the whole body shape of people with EDS can be different (marfanoid habitus). The link is very plausible however low sample groups were used in a small number of studies, so this currently seems to be considered as unproven. Further research needs to be done. (ref) (ref).

It was my Dad’s birthday on the day of the scan, but he kindly came with me to the hospital. Happy Birthday again Dad, it was great spending time with you on your birthday. Sorry I dragged you to a boring bone scan. I promise next year I’ll take you to a much more exciting medical procedure. 🙂

Here is a bar chart showing my emotional response to my latest bone scan result: 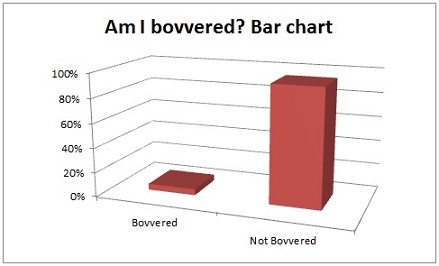 Here is a pie chart showing the percentage of my body expensive medical scans have found to be puny: 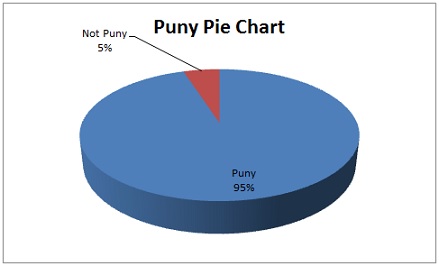 Thanks for reading, all comments welcome. Perhaps you might enjoy listing the other ways in which I compare unfavourably with a 30 year old female.