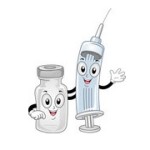 There was an interesting discussion in the EDS-UK Men’s support Group on Facebook recently about local anaesthetics, and how they are less effective on people with EDS Hypermobility type. It’s a well known problem, but the reason they are less effective seems to be unknown and there’s currently no accepted method of managing the issue.

Before I was diagnosed with EDS I avoided the dentist for years as I always found it painful. Eventually I found a sympathetic dentist who gave me a larger dose of anaesthetic which worked, but not for very long. I’m overdue for another dental check up and I’m pretty sure I need a couple of fillings. So for reasons mostly based on cowardice I thought I’d do a little research, hoping to find what theories there are about the cause of the problem and what practical advice there is for management.

After some quality time spent with Google I found a Danish team of doctors were the first to document the problem in 1990 (ref) (ref). They were taking biopsies to research skin strength in EDS and found the patients experienced pain despite local anaesthesia (Lidocaine). The patients also reported previous problems with local anaesthetics.

In 1991 the same team proposed the anaesthetic problem could have a useful application, as it could help distinguish people with EDS from people who just have Hypermobile joints (ref). These two groups of patients are hard to separate. But the test they suggested wasn’t widely adopted, perhaps because it involved sticking pins in people to see if it hurts?!

The most discussed theory I found for the cause of the problem is that the anaesthetic solution may diffuse away from the injection site too rapidly due to the lax nature of the connective tissues. If the anaesthetic disperses before it has taken full effect then the patient will not get sufficiently numb. This theory was tested by a study in the year 2000 which injected a radioactive solution into the skin (ref). They found the rate of dispersal was identical between patients with EDS and controls. It was one small study but casts a lot of doubt on the theory.

A couple of articles that discuss the ‘rapid diffusion’ theory suggest a drug that constricts blood vessels, such as epinephrine, could be used to reduce the problem. Epinephrine is a form of adrenaline, which can increase heart rate. Many people with EDS Hypermobility type also have POTS, so are already very prone to tachycardia. Using a drug such as epinephrine could create additional symptoms for people with POTS, but achieve nothing as rapid diffusion of the anaesthetic solution may not be the cause of the problem (ref) (ref).

I found two medical papers by a team of German doctors that mention a different theory for the cause of the anaesthetic problem (ref) (ref). In their paper titled Anaesthesia Recommendations for Patients Suffering from Ehlers-Danlos Syndrome the authors comment ‘…local anaesthetics might have reduced or no effects in some patients. Tissue scarring results in reduced spread of the local anaesthetics and (nerve) block failure’. However no research is mentioned that supports the theory.

With no proven explanation the three main EDS charities all say the cause of the anaesthetic problem is unknown. The best general advice I found for managing the problem was from Dr Alan Hakim on the HMSA website (ref). ‘It is important for your dentist or your doctor to know if you have problems with local anaesthetics. Some people will respond to more than the standard dose or to regular top up of more anaesthetic during a procedure. If your dentist or doctor is not familiar with this issue in EDS then, in the first instance they may be reluctant to give you more anaesthetic. Tell them your situation and this will help them to understand and to help you’. – Dr Alan Hakim also wrote a paper about the issue with Professor Rogney Grahame in 2005 (ref).

I only found one medical paper that recommended a particular dosage to manage the anaesthetic problem (ref). In section 8.7 Surgical and Anaesthetic issues the writers comment ‘In case of local/minor surgery, consider the frequently reported resistance to intradermal lidocaine infiltrations and topical EMLA cream in JHS/EDS-HT; a double dose of anaesthetic by intradermal injection as the first choice may be effective.’

Several studies have looked at the possible benefits of pre-medicating with ibuprofen before a dental procedure, with mixed results (ref) (ref) (ref). A paper titled Pain Management for Dentists: The Role of Ibuprofen (ref) comments ‘Ibuprofen pre-medication therapy increases the depth of anaesthesia because of the COX pathway-blocking and PG-reducing effects of NSAIDs, which result in significant inhibition of stimulated nerve activity’ and ‘The pre-emptive use of an NSAID before an operation may be more beneficial than its use after an operation’ (NSAID = Non-steroidal Anti-Inflammatory Drug). These studies involved people who do not have EDS and overall the evidence is inconclusive. However for many of us with EDS any additional pain relief during or after a dental procedure would be welcome, so this might be an idea worth considering. Please discuss the use of ibuprofen or other NSAIDs with your doctor, as they are not suitable for everyone.

The last dentist I visited had never heard of EDS, let alone the anaesthetic issue it causes. Stickman Communications are always great for practical solutions to an EDS problem. They sell a key-ring card explaining the anaesthetic problem for dentists or doctors, so at least they’ll know you aren’t inventing the issue or drug seeking 🙂 (ref). – I promise I will receive no commission from this endorsement!

Numerous people with EDS also report experiencing problems with epidurals (ref) and general anaesthetics. The most comprehensive medical paper I found about EDS and anaesthetics can be viewed HERE. If you’re due for a procedure that requires an anaesthetic and want to ensure the issue is taken seriously, you could print the paper and give it to your medical team.

We’re not alone in living with the problem of ineffective local anaesthetics. People with red hair also don’t get the full benefit of these drugs. I’m not joking! (ref) (ref). Which makes you wonder, if you have both EDS and red hair, do anaesthetics have any effect at all?

Due to the lack of formal research into how best to manage this problem it’s difficult for doctors and the EDS charities to recommend a solution. However the problem always gets a lot of discussion in the social media with several alternatives to Lidocaine suggested (ref). The drugs that are frequently mentioned include Articaine (Septocaine), Carbocaine (an anaesthetic without epinephrine), and Bupivacaine (Marcaine). They all get mixed reviews, so it’s possible different drugs suit different people. But by discussing our experiences as a community we might find the drug that is most commonly effective for people with EDS. Perhaps it could be a first project for our new EDS-UK Men’s Support Group?

(Please remember I have no medical qualifications. I’m just a guy with EDS who wants to learn how to manage it better).

UPDATE: Thank you to Sandi, a reader who provided this link to an article in the British Dental Journal which mentions a small study which found those with anaesthetic resistance and JHS (Joint Hypermobility Syndrome) have a mutation in the SCN5A gene, responsible for variant voltage-gated sodium channel 1.5 (Nav1.5) in peripheral nerves. (ref).

Sandi also kindly provided this link to a very helpful document to be given to surgeons, anaesthesiologists and dentists before a procedure recommending precautions which should be taken for patients with hEDS / HSD when giving anaesthesia (ref).

« ‘A Rough Guide to Hospital’ » The EDS International Registry – Update