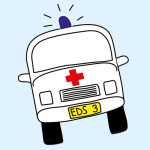 I have no artistic talent whatsoever, literally none. So when it came to making a header image for this blog I was rather stumped. I wanted to avoid drawing anything, so I bought a toy bendyman on eBay and photographed it in various silly positions which were supposed to show hypermobility. It was a fun idea, but looked a bit daft on screen (see below).

So I decided I needed a professional artist, hopefully with knowledge of the subject and a sense of humour. That gave me a shortlist of… one, but a very ideal one, Hannah Ensor.

Hannah’s background is in science. A 1st Class Honours degree in Environmental Health from King’s College London, followed by a career in Environmental Health. Hannah had an unusually high level of sickness absence through school, and within 2 years of starting work random joint issues and fatigue had reached disabling levels and she was diagnosed with EDS. A year later she was also diagnosed with POTS.

It was when hospitalised with her first severe POTS attack that the first bendy stickmen appeared. Posted on the Hypermobility Syndromes Association’s (HMSA) forum they proved popular and soon became a booklet.

Since being medically retired in 2010 the booklet has evolved into 4 cartoon books and an entire business. Stickman Communications uses the simplicity of stickmen to convey the complex realities of life with various disabilities and medical conditions in a way that works for everyone – patients, family, friends, colleagues and medical professionals, and people of all ages alike. Breaking down barriers of misunderstanding and miscommunication.

Although proud of her stickman empire, Hannah thinks her greatest achievements have been in learning to manage her EDS and POTS and keeping up with her physio regime. Having said that, her proudest day of all time has to be 26th April 2012. The day she was officially appointed HMSA Patron for Kids and Teens.

So with only one candidate in mind for making the header image I crossed my fingers and sent an email. Hannah has a hectic schedule these days with drawing stickmen, giving lectures, blogging and fundraising and working for charities. But she kindly agreed to squeeze the job in and 26 draft versions later we came up with the above image (I use the term we very loosely). I love it! I’m hoping this blog will be a useful resource, but also easy to interact with and fun. The header image sets that tone perfectly. You can also see three of Hannah’s brilliant cartoons on this blog. I was very tempted to use more.

Thank you very much Hannah.

Hannah’s cartoon books and all her products are available through her website. – Stickman Communications. Hannah has also worked with WhizzKidz and PoTS UK.