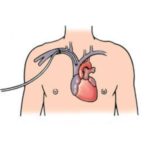 As I’ve mentioned many times on this site, I can’t eat normal food so instead liquid food is pumped into my body through tubes. Unfortunately those tubes have a limited lifespan and one of mine recently failed.

A Hickman line is a long piece of silicone tubing which is inserted through the skin on your chest, then travels upwards and enters a main vein in your neck. One end of the line remains outside of the body, while the other end stops just above your heart. My first Hickman line was inserted about 6 years ago. I’ve used it solely for pumping fluid into my bloodstream, but they can be used for removing blood or injecting medications. Hickman lines have an average lifespan of 2-3 years. I looked after mine carefully and managed to make it last much longer, but like its owner it was showing signs of old age.  ?

About a year ago my line became partially blocked. After two failed attempts it was unblocked at The Royal London Hospital using pure alcohol. I was given a spare ampoule of alcohol in case the line got blocked again, which it did a few weeks ago. I tried using the alcohol, but bizarrely the substance that had previously dissolved a blockage jammed the line completely. However it wasn’t all bad news, as after injecting the alcohol I felt a bit drunk for the first time in years!

As my Hickman line was completely blocked I was admitted into The Royal London Hospital to have a replacement line fitted. After six years inside my body removing the old line was a struggle for the surgeon. It snapped twice in the process, I needed a number of stitches and my neck was pretty painful for a few days. Thankfully fitting the new line was straight forward. It was inserted in the Interventional Radiology Department. There were eight people in the theatre looking after me and the surgeon was able to watch where he positioned the line using a moving x-ray which was shown on TV screens. It was a good reminder of the amazing quality healthcare which is available in this country ‘free at the point of use’ and how lucky I am to live here. In most countries I would have died of malnutrition a few years ago.

It was my fourth admission onto the same ward at The Royal London Hospital, so I got to see some nurses who feel like old friends which was nice. The hospital opened in 2013 at a cost of one billion pounds (£1,000,000,000), but the TV in my room didn’t work and the wi-fi was useless! So it was a very dull week but my Kindle and iPod got me through.

The procedure happened two weeks ago now and the wounds have healed well. I had my stitches out a few days ago which was the final stage of the process. My new Hickman line feels more robust than the last and it’s easier to clean. Hopefully it’ll keep me going for another few years.

With hindsight it would have a been a quicker and smoother process if I’d asked to have the old Hickman line replaced due to its age, rather than waiting until it completely failed. That’s worth mentioning as my PEG tube has a life expectancy of 3 years and it’s currently 7 years old. Asking for it to be replaced would be a smart decision, but having just spent an uncomfortable and boring week in hospital I think I’ll take the stupid option and leave it alone a while longer. ? 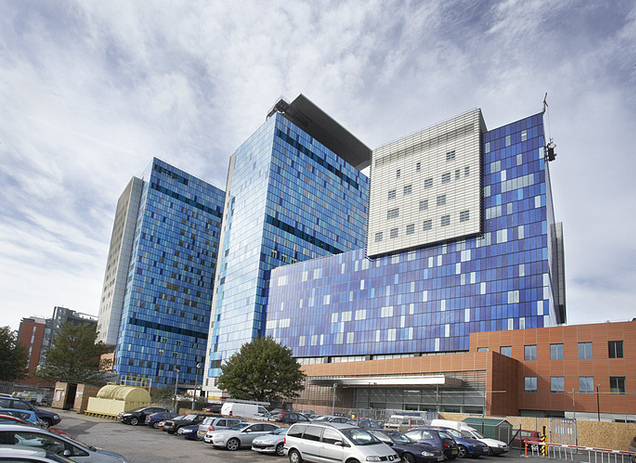 The Royal London Hospital opened in 2013 at a cost of one billion pounds, but the wi-fi doesn’t work…